Quotes about:
Language
Page 1 of 2

"When I hear that Jennifer Lopez is such a role model for Latinas, on the one hand I respect her for her business sense and I respect her for her ambition. But she's in the entertainment world. She's done it on her looks and very specifically on her anatomy. Madonna is also considered a great businesswoman and so is Yoko Ono. I feel if I had a young daughter right now, I would feel a little discouraged if that was my daughter's primary role model for success and for young people, for Latinas and Latinos." 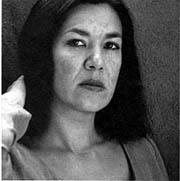