"My List of Virtues contain'd at first but twelve: But a Quaker Friend having kindly inform'd me that I was generally thought proud; that my Pride show'd itself frequently in Conversation; that I was not content with being in the right when discussing any Point, but was overbearing & rather insolent; of which he convinc'd me by mentioning several Instances; - I determined endeavouring to cure myself ..., and I added Humility to my List, giving an extensive Meaning to the Word." 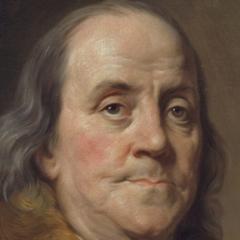