"The scientists who made the atomic bomb are, in my sense, people with a tragic destiny. You know, there was the US race with Nazi Germany and good evidence that the Germans were more advanced in nuclear physics, and we had to get the bomb first. But then there was the use of that dreadful weapon, or instrument of genocide, and many of the more sensitive scientists turned quickly into anti - nuclear people - and very effective ones." 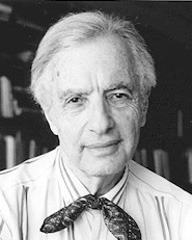