Quotes about:
Language Writing
Page 1 of 3

"In my own writing, I've mostly abandoned end-rhyme, but wordplay is still a huge part of my process. I've written a series of mermaid poems in the last few years. The first one was called "The Straightforward Mermaid" which arose from my delight in that word combination. After that, I decided that future mermaid poems would have to be words ending in "d" or "t," which led to "The Deadbeat Mermaid," "The Morbid Mermaid" and so forth . . ." 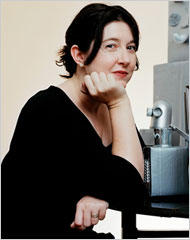