"When I ran against George Bush Sr. in 1992, and we did very well in New Hampshire, and then we went on to California, it was four, five months later, I got 30 percent in the counties in Southern California, because Californians wanted us to do something about thousands of people walking into our country on weekends, and the president of the United States and the government of the United States, unlike General Eisenhower who dealt with it, did nothing. And that's what Trump is riding." 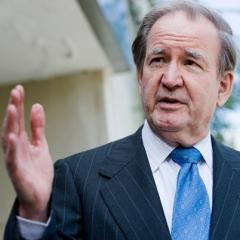