"I was in the White House, probably the only administration I'll ever work for. The administration was not a success, neither at home nor abroad. The Iraq War was not a success. The condition of the average person was not enough better at the end of seven years of George Bush than it was at the beginning, and certainly it all ended in the collapse that was the Great Recession. So I feel a sense of karmic obligation to the universe because of that." 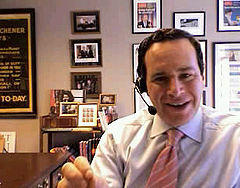