"There's one America that Barack Obama wants, and there's a very different America that I want. I want an America that is entrepreneurial, that has a strong private sector in which religious faith is respected and even nourished, in which there's vigorous debate across the spectrum, and in which our universities teach real history instead of propaganda. Certainly the decline of America is a choice, though the outcome is not foreordained. But liberty is also a choice, and I'm doing my best to persuade the people of America to make the latter choice." 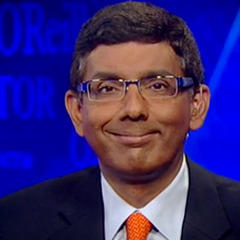